Finally in the clear

We don’t expect any more flooding at this time. The pigs are back to their usual feed and market schedule. The culvert has been replaced, the driveway is mostly fixed, and the fences are repaired. Thank you to everyone for your understanding and support during the floods. You are keeping our family farm running!

Another flash flood warning. The gauge upstream of us on Pacheco Creek went from 3.5 feet to over 19 feet today.

The water is 800 feet wide and flowing fast. It seems to be slowing down a tiny bit. The water is a foot above the top of the new culvert. Hopefully the roadway around it is compacted enough so it doesn’t wash away.

Our neighbors called us at 2:30 am early Wednesday morning to warn us about the flood. We quickly dressed and ran outside. We could hear the roar of the water passing through, and as the nearly full moon shone through the parting clouds we could see a river coursing over the whole midsection of the farm.

Pigs and equipment were the first concerns. Soon the tractor and truck roared out of shallow water to safety. The pigs, surprisingly, were not restive; they had just moved to higher ground to go to bed. A few were still up and about, their normal sleeping places under water.

The water came up much, much higher than the ’98 flooding. Being a flash flood, there was also a strong current. The new “river” was over 1000 feet wide. Two thirds of our farm was covered in water.
Our house is fine, it was built on the highest point on our farm. We’ve lost a lot of feed: most of the grain (there’s 2 day supply left), all the veggies are gone, still some walnut hulls left. As of today (Jan 12) we’re picking up more grain, but we can’t accept our usual truckloads of veggies because the driveway is gone or mostly mud. The culverts under the driveway have been washed out or filled with mud. A lot of our fencing is gone, other fences are buried under several feet of new topsoil.
http://water.weather.gov/ahps2/hydrograph.php?wfo=mtr&gage=phoc1

Facebook link for video and Weather Channel interview on January 11

This time we were prepared! We had warning and the crest of the flood was during the day. We put the pigs’ food in bins on high ground and didn’t lose any. The varmints displaced by the floodwater are another problem… They eat so much of the pigs’ feed.

The pigs are all fine, except for one “retired” boar, who may have died from natural causes. They moved to the islands of high ground in the flash flood river and went back to sleep. 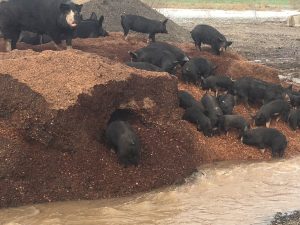 Jack spotted a sow striding through the edge of the current, her single piglet swimming after her and being swept away by the current. (She had an unusual litter size: just one piglet.) He ran and plucked her out of the water; by that time mom was nowhere in sight. Little one was chilled to the point of quiescence. We brought her inside, wrapped her in a towel to mitigate accidents and put her by the wood stove to warm up. It took her 20 minutes to stop shivering. She was so cold, tired and so freaked out that she didn’t even want to eat! She stayed quietly in her box for the next few hours.
The next morning while we were outside assessing the damage and the possibilities of reconnecting to civilization, our youngest daughter was inside, chasing a piglet around the house. We fed the piglet a pancake and took her outside to find the mom. It didn’t take very long; little piggy did not like being held in a towel and objected shrilly. That caught the attention of her mother, who turned right around and came for Jack. He set the little one down and she immediately ran up to her mom and started nursing. 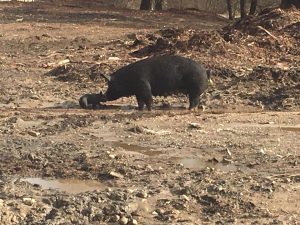 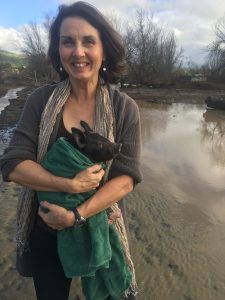 Buy more pork! We made this page because people have been asking us how they can help. If you don’t live close enough, donations are another way you can support this local family farm.

The floods are over, we’ve rebuilt almost everything: fences, roads, pig shelters. The pigs have all the fun foods back on the menu (veggies galore!) Thank you so much for your understanding and support!

Feb 9 -After the second flood, the driveway is impassable for cars again. We’re using the tractor as a ferry across the mud to get to our cars parked up by the gate.

The new culvert pipe is still in place! The material around it hadn’t had time to compact well, so a lot washed away. We still have a little roadbed material, but we’ll need to truck in a lot more for repairs.

The fence posts should arrive today.

We’re trucking in extra dry bedding for the pigs. They love the mud, but they still need a dry place to sleep. The big truck can’t get through the mud so we reload the bedding into a smaller vehicle to bring it to the pigs.

So many varmints! They’re displaced by the flood water and they eat the pig food. The cats are doing the best they can. Moppet proudly displays her giant field mice at the front door, then is upset when we don’t let her bring them inside.

Feb 7 – Still awaiting shipment of electric fence posts (they shipped me 6 posts instead of 6 cases of posts). Trying to bring in new dry bedding is an effort since the trucks are heavy and the roads are saturated. I have to reload and drive a smaller truck over the deep muddy tracks.

Cleaning up from the debris flow has been hampered because of the deep mud. The tractor has gotten stuck several times. 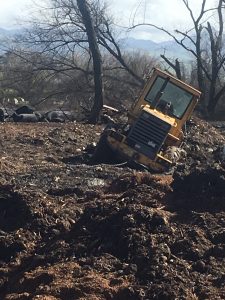 Replacing the culvert under the road 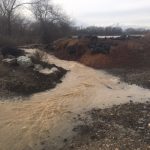 This water shouldn’t be here. 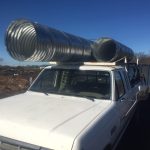 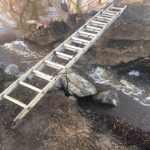 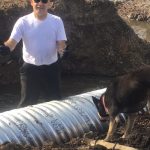 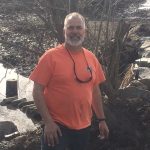 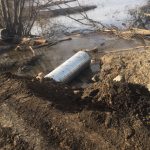 Jan 17 – One of our suppliers has an oversupply of feed. We’re trucking it in as fast as we can!

Jan 13, 14 – We’re repairing the driveway. The pigs are digging out the beets that got carried away and “replanted” by the floodwater. There are still some walnuts in the pile of walnut hulls that didn’t wash away. Their diet doesn’t have the variety they’re used to since their veggies washed away, but there’s enough food for the piggies and we’re hauling more in.

Jan 12 – Today we’re trucking in more feed. We can’t take it all the way down the driveway, but we can dump it just inside the gate.